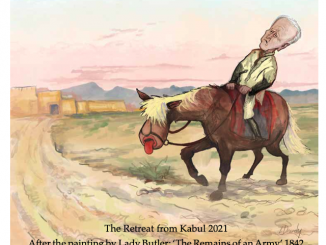 Legal cases rarely make for very exciting reading. The Court of Appeal’s decision today, that the High Court should not have made a declaration about the limited powers of comparatively young teenagers to consent to potentially drastic gender reassignment at the Tavistock Clinic, is no exception. Unless you suffer from serious insomnia, it is not recommended entertainment (if you are … [Read on]

An eight-part drama about the Nuremberg Trials has started on Radio 4. Rhian Roberts, a BBC Commissioning Editor said it was, ‘Designed to present phenomenal moments of history in a compelling style so we can all continue to understand how our world was shaped by them.’ What we got was inexplicable; no Lord Shawcross, Britain’s lead prosecutor, whose opening speech, … [Read on]

Read these terrifying figures posted by Migration Watch today (link ) consequent on the government’s active encouragement of mass immigration. When will Priti Patel resign? ‘Around six in ten (62%) of the nine million or so foreign-born population were born outside the EU; nearly four in ten (38%) were born in the EU, according to recent estimates Since 2001/2 the Eastern … [Read on]

I was just six years old when the U.S. entered Afghanistan. Now, more than ever, I worry about the fate of the misunderstood country my parents once proudly called home. As a Brit with Pashtun heritage, I often look back at my childhood and remember the moment when Afghanistan was globally dubbed a global hot bed of Islamist terrorism in … [Read on]

We hear from our political leaders that the British and Americans were taken by surprise by the advance of the Taliban in Afghanistan, the sudden and complete collapse of the Afghan forces, and by the Taliban’s surrounding of the airport at Kabul, where chaotic and tragic scenes are now unfolding. Apparently, our 20 years of first-hand involvement in the country … [Read on]