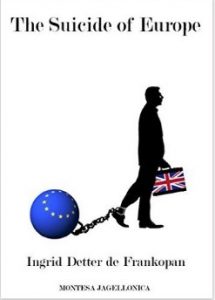 In her book, ‘The Suicide of Europe’, Ingrid Detter de Frankopan, the distinguished European jurist who held the Chair of International Law at Stockholm University, warns us of the danger we run if we vote to remain in the EU next week. If we do we will be governed in perpetuity by an organisation run by unelected, unqualified and unaccountable bureaucrats, headed by commissioners to whom the public has no access, and who have lifelong immunity from prosecution.

Even the hard headed Swiss were tempted by a tariff free Europe to join, but they thought the better of it.

‘An eye opener may be the decision of the Swiss Government on the 3rd of March 2016 to withdraw its application to join the European Union. The National Council, the Lower House of the Swiss Parliament, voted 126 to 46 to formally withdraw the application 24 years after the country first applied for membership of what was then the European Community. The main reasons as stated were that Switzerland could not agree to abandon its independence and could not accept that the Court of the EU would take priority over the Swiss Supreme Court.

The withdrawal motion will later go to the Upper House but this is expected to be a formality in view of what the Lower House has indicated. Switzerland had in earlier negotiations asked if the European Union planned to become supranational and develop into a ‘United States of Europe.’ The answer had been that this was not the plan ‘in the short term’, an answer that made Swiss interest wane.’

Mr Lukas Reimann who proposed the motion before the Swiss Lower House later advised us in Britain,

‘A big advantage of leaving the EU, is free trade worldwide, not only between member states, making it easier and cheaper for British companies to export their goods to the rest of the world. The boost to income outweighs the billions of pounds in membership fees that Britain would save if it left the EU.’

Professor de Frankopan’s book, as you might expect of an international jurist of her standing, while being surprisingly readable for a legal tome, is extensively referenced and very accessible. It offers some startling revelations. So even the most enthusiastic proponent of voting ‘yes’ in the referendum will be given pause for, somewhat nervous, thought.

Do we really want to join an organisation which to the reader appears to be run by a collection of political Godfathers, whose plans for the restocking of Europe with young Arab males sparked the flood of Middle Easters migration into Europe that has cost so many lives ? Brussels’ Mobility Partnership and Neighbourhood Schemes actually encourage, and have done, immigration from Middle East. For years Europe has been working on extensive plans to do away with visa restrictions to countries that share its borders. The eventual aim is to add countries, even those as far away as Jordan, to the EU empire. Much of this spiders web of protocols and agreements, is woven out of sight of the public, or, if exposed, lied about. Despite public assurances by David Cameron that Turkey is years away from being made a full member of the EU, Turkish was quietly adopted as an official language the EU only a matter of weeks ago.  He was well aware of it, but he did not tell. His loyalties lie elsewhere.

And what do we know of the the Lisbon Treaty upon which these dreams of Empire  are built?  Copies of it, Europe’s equivalent of the American Constitution, relates Professor De Frankopan, are unobtainable even in Rome, where it is said to be deposited. Nor can one find details of all the annexes and variants to the treaty a lawyer might need. No wonder Gordon Brown when he was Prime Minster flew semi secretly to Lisbon to sign it alone rather than in the presence of the rest of the EU leaders with whom he dared not been seen with.

‘Speak the truth the Swedish proverb goes’, Professor De Frankopan reminds us, ‘and you will wear the robes of a king.’

It is not something anybody can say of the EU.