Is Mr. Trump great-souled or small? Can he be ruffled by a tweet? Is he subject to the whisperings of an Iago? Does Washington need such an outsider? Might the qualities that make Trump good in business prove a tragic liability in the political world? All the above. Trump is both larger and smaller than most of our recent presidents. … [Read on] 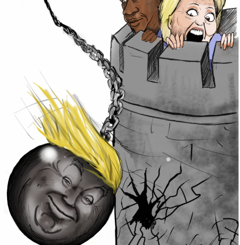 One of the first books I ever bought was Trump’s The Art of the Deal. Yes, I readily scorned the stuffy volumes of Balzac’s Human Comedy under my native roof, to go roll in the hay with Trump’s paperback. And what is worse still, a kind of affection lingers in my heart for him, in the same way I can’t … [Read on]

Churchill in his address to Congress on the 26th December 1941, most likely after a brandy or two, declared, ‘If my father had been American and my mother British, instead of the other way around, I might have got here on my own…I may confess, however, that I do not feel quite like a fish out of water in a … [Read on]