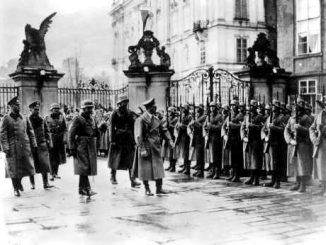 I’m re-reading C.H. Sisson’s autobiography, On the Lookout, by a long chalk the wisest book on all the important matters I’ve ever read. One short extract will give you the flavour: “On 8th March 1936, German troops entered Cologne. I have no idea what the real chances of action by the West were. Certainly in Paris, in my circles and … [Read on]

I’ve always wondered what “liberal” means in connection with the Liberal Party. I know what they’d like us to understand by it, because it’s their perpetual boast that they are the tolerant party which stands for democracy. Well, today we know what the liberals mean by “tolerance” and “democracy” – for they have given us one very definite, practical example. … [Read on]

Writing in Church Times, The Rt Rev’d Nick Baines, Bishop of Leeds, has spoken of a crisis of “truth and trust” in UK politics caused in part by Prime Minister Boris Johnson who, alleges Baines, has “repeatedly lied, and misrepresented Brexit to the nation.” Bishop Baines says that Boris Johnson has “lied repeatedly” about the motivation behind his decision to prorogue … [Read on]

For all their hysterical pretensions, the crazed environmentalists do not love our world: if they did, they would not so officiously and rudely refer to it as the planet. These people are no friends of the earth. They are attention-seeking narcissists who are not dying from anything in their apocalyptic catalogue of environmental poisons. They are terminally-ill nonetheless: dying of … [Read on]

The Archbishop of Canterbury is proposing to groups of MPs his intention to chair “citizens’ assemblies” to stop a no-deal departure from the EU. First question: who are the “citizens” who will make up these so-called “citizens’ assemblies”? Citizens – though, since the people of Britain are not French republicans, we call ourselves “subjects” – voted decisively to leave the … [Read on]

Every year the BBC extravagantly boasts that its Promenade Concerts are “the world’s greatest series of concerts of classical music.” Well, let’s see… This is how they bill tonight’s offering: “The BBC Proms takes over the newly refurbished Battersea Arts Centre for a showcase of provocative, witty and boundary-crossing composer-performers, who have been driving new music in previously unimagined directions.” … [Read on]

There is a creeping war against everything that symbolises Christianity: attacks on mountain summit crosses, on sacred statues by the wayside, on churches and recently also on cemeteries. That is the conclusion of a comprehensive report by PI-News a German press agency which has gathered its information from scores of Catholic and Protestant churches, their priests and pastors. Many hundreds … [Read on]