As soon as I heard of the massacre in the club in Orlando and of the murder of Jo Cox, I knew that within a few hours the candles would be out. And sure enough I was right. Like the ants that appear on my kitchen surface when there is something sweet left about, lit candles in little glasses appeared … [Read on]

Roll of Honour. List of politicians murdered or assassinated in England Wales and Scotland.(Wikipedia) Victim(s) Assassin(s) Notes 293 Carausius, usurper of the Western Roman Empire 946 Edmund I, King of England Stabbed at a banquet 978 Edward the Martyr, King of England 995 Kenneth II, King of Scotland 1100 William Rufus, King of England Walter Tirel Shot in the heart … [Read on]

Sixty days after a successful ‘Remain’ campaign, amid ever increasing mayhem inside the Tory party, Cameron goes to the Queen and asks her to dissolve parliament. Jeremy Corbyn is returned with a nine seat majority. Within a month he institutes a national (not just London as was originally planned) mansion tax starting at houses over £2,000,000. This time however there is no provision … [Read on]

With the referendum imminent, the government and Remainiacs have not only overseen electoral fraud but have also launched a desperate all-out final barrage of fear to pummel undecided voters into submission. But as previously pointed out here, its fabricated predictions of calamities are entirely speculative, whereas the EU is responsible for real calamities occurring now: the Eurozone crisis which has … [Read on] 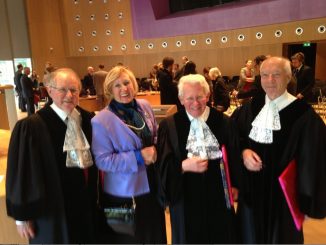 In her book, ‘The Suicide of Europe’, Ingrid Detter de Frankopan, the distinguished European jurist who held the Chair of International Law at Stockholm University, warns us of the danger we run if we vote to remain in the EU next week. If we do we will be governed in perpetuity by an organisation run by unelected, unqualified and unaccountable … [Read on]

I seem to find social pathology everywhere I look, even in Winchester. Perhaps it is ubiquitous or perhaps it is me: one tends, after all, to see what one is disposed to remark. We were staying overnight in Winchester, my wife and I, to catch the ferry next day from Portsmouth to Caen. We went for a walk, Winchester still … [Read on]

Islam is a religion of peace, OK, that’s what we are told. It has nothing to do with beheadings in the desert, murders in Paris or the downing of planes. Peston on Sunday last night, 12th June, lined up people to discuss the most recent massacre in Orlando, Texas, the worst shooting in modern US history, and they hardly mentioned … [Read on]